If you are in the mood for a quick and colorful read, I’ve got the perfect book for you. Descriptive words and metaphors entwine to create a magical narrative in The Fifty-Year Sword by Mark Z. Danielewski.

From the outside, the book looks like a regular chapter book, which is what I thought it was when I bought it. Much to my surprise, when I opened it, each page was set up like a poem and had pictures made out of string, as if they had been sewn into the page.

The book was an adult’s scary story set up in the form of a children’s book. Told from five different points of view that are identified by color-coded quotation marks, you don’t know who the narrators are, nor does it matter. 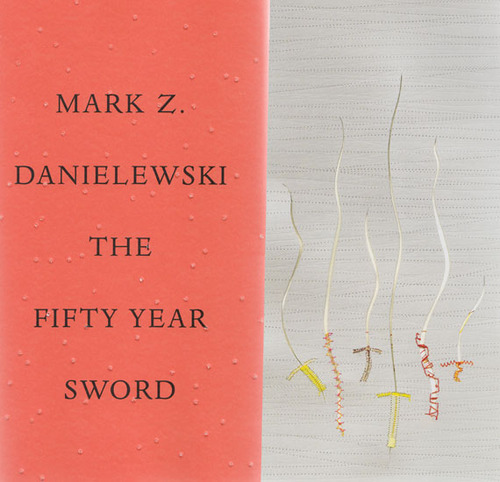 “so crossing his legs, folding himself into himself,

“refolding, until right before their eyes he no longer seemed

“overdraped in his strange silveryblack tunic, his head heavily bowed.

“crossing their legs, and if not

“wanting now only to know what was

Disgraced seamstress, Chintana is reeling from her recent divorce caused by a woman named Belinda Kite. Trying to get back on her feet, Chintana reluctantly attends the 50th birthday party for Belinda on Halloween Eve, where she meets a social worker exhausted by five small orphans with peculiar names.

Trying to avoid a run-in with Belinda the Witch, she decides to help the social worker out and goes with the children to hear the storyteller invited to entertain the kids. They all sit in front of the “hrowling and gulking” storyteller whose mysterious manner captivates them.

A black case with five clasps faces the five children. The storyteller grins evilly at his small audience and begins his chilling story.

Starting by warning them of his black heart and bad intentions. He informs that he was looking for a weapon. Not a gun or a bomb. But a special weapon that he searched all over the world for. He had searched for years, until one day he heard a story about:

“a valley assault and

“a forest of note

“and a mountain of

“paths and a man with no

“harms who made terrible weapons which he sold but never for

The storyteller takes the children through his quest for the special weapon that he has dedicated his life to finding. Once he finds this dangerous weapon he has to wait fifty years before he can use it. It is a weapon that not only kills lives, but also memories and experiences. At the end of his story, each child flips one of the clasps of the case up. To see nothing.

The storyteller pretends to pick it up and is about to slice one of the childrens’ necks with it when Belinda enters the room, grabs the “sword” and proves to them all that it is fake by slicing every part of her body with it. Nothing happens. The storyteller leaves and everyone at the party goes outside at midnight to toast Belinda’s birthday with a glass of champagne, not knowing that something mysterious and gruesome was about to happen.

Soon after the storyteller leaves, another one comes rushing up to them apologizing for being so late. This was the one that was hired.

Who was the other man? Could the sword have been real? And what happened out in the moon lit snow?

The Fifty-Year Sword was a new experience for me. I can’t say that I loved it or that reading it makes me want to go check out some of Danielewski’s other works, but I can say that it is something you should try. That is why I have reviewed and recommended it. It is such a uncommon set-up and writing style that it makes me remember the book.

A book is good if you can remember it. I have read more books than I can count and I know that people have asked me about a book I’ve read before and I won’t even remember reading it. I have books that I will finish reading and 30 minutes later: nothing, can’t even remember the main characters name because nothing in the book stood out to me.

So, though The Fifty-Year Sword is nothing to gush about I would recommend trying it because it is something that will intrigue you.

Heads Up: spelling, grammar, and logical thinking are thrown out the window in this unique poem/book/scary story.